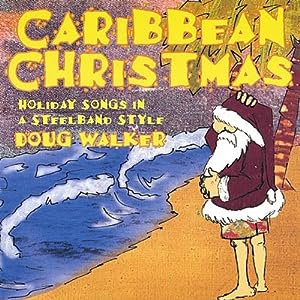 Celebrate the holiday season the Island way…let Doug Walker’s Steel Drums give the season of giving a Caribbean twist. All your favorite songs played in a spicy Caribbean style! Instrumental.

Miami Beachs Doug Walker has been bringing the sound of the Steel Drums /Steelpans to American audiences for over a decade.

Dougs musical journey started in Wilmington, NC with piano lessons at age 7. Growing up in a musical family, Doug constantly heard the piano from his older sister Julia and father Julian.

Doug went on to study percussion at East Carolina University, where he was awarded the Harold Jones Scholarship for percussion. Doug studied one year with Harold Jones before being formally introduced to the steel drum by Mark Ford, now Coordinator of Percussion at the University of North Texas.

Doug was exposed to the steel drums/ steelpans early on by the Shriners Steel Drum Band based in NC in the late 1970s-1980s. This band would perform at the local festivals. Doug got another taste of the steel drums while on a Caribbean Cruise with his high school band.

After studying with Mark Ford and Harold Jones at ECU and earning his bachelors degree in music education, Doug was awarded a teaching assistantship to study and teach percussion at Northern Illinois University. Here Doug studied percussion under the direction of Rich Holly, Robert Chapel, Al OConner and one of Trinidads finest steelpan tuners and arrangers, Cliff Alexis. While attending NIU, Doug toured throughout Taiwan and performed on cruise ships in the Caribbean in the summer.

After earning his masters degree in percussion, Doug once again returned to the cruise ships.

The cruise ship tour landed Doug in Miami where he has been based for the past decade.

Even if Doug Walkers name is unfamiliar to you, it is guaranteed that you have heard his music. His steel drum sound and quality recordings are played all over the country.

Dougs passion, however, is modern jazz, an affection he discovered upon hearing Gary Burton and Chick Corea back in his teen years in North Carolina.

Doug strives to be an artist and an entertainer. “As an artist, I want to bring the steel drum to the consciousness of people everywhere. I never want to be playing another gig and have someone ask me what kind of instrument this is. I want everyone to know the history and roots of the steelpan/drum and what the first generation of panmen in Trinidad went through to develop this instrument.”